During my first Abstract Algebra class at the University of Illinois at Chicago, I met a great group of girlfriends: Marcy Robertson, Sarah Oppland, Natalie McGathey, and Cristina Haidau.  Four of us still get together every few months. [Marcy’s a professor at the University of Melbourne, making reunions more difficult.]

This post is about a picture book I read to our epsilons* at a recent get-together. Here we are with nine of the ten plus a best friend (the tenth was visiting grandparents). 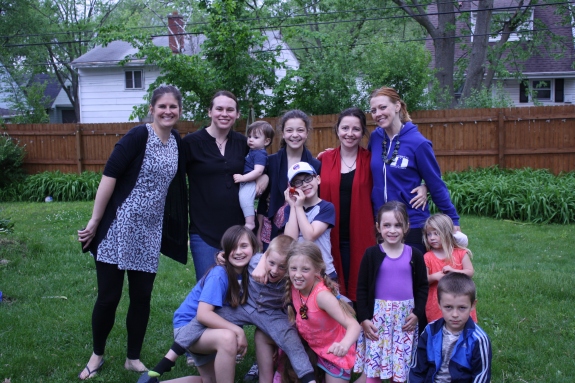 When deciding which book to share with this group, I looked for two things: a book that could appeal to a wide age range (3 -12 years old) and one that could segue into an outdoor math activity.  The Greedy Triangle felt like a perfect fit.

The Greedy Triangle was written by math-ed guru Marilyn Burns and illustrated by Gordon Silveria. Published by Scholastic in 1994, it’s one of five books in the Marilyn Burns Brainy Day Books series for Scholastic. For these books and more of Marilyn’s magical work in math education, go here. 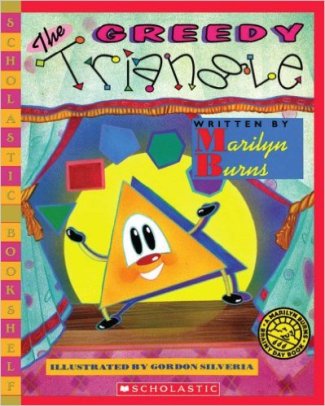 The Greedy Triangle follows a triangle who believes if he “had just one more side and one more angle…life would be more interesting.” He seeks help from a shapeshifter who turns him into a quadrilateral. As a quadrilateral, he does new and interesting things, but still yearns for more.  The shapeshifter turns him into a pentagon, a hexagon, and so on.

As the shape formally known as triangle becomes greedier and greedier, his friends begin to feel left out. As his friends leave him, the triangle realizes he isn’t happier with more sides and angles, but less friends. He returns to his triangular life and reunites with his friends.

This book is a great introduction/refresher on polygon names. Here is a lovely illustration of the triangle’s side shifting sequence. 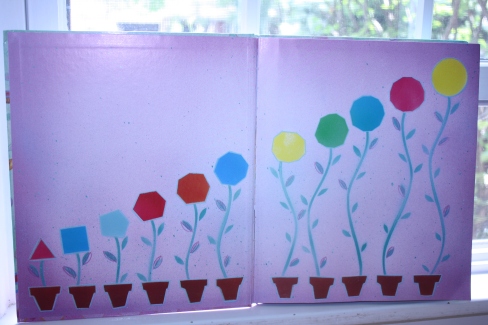 This illustration demonstrates that if you keep adding sides (and angles) to a polygon you end up with a more circular shape, thus offering a intuitive introduction to limits.

Throughout the book, the illustrations offer a variety of ways that shapes shape our world. For example, a triangle can be a half of a sandwich, an instrument in an orchestra, or a sail. A quadrilateral might be a checkerboard square, a picture frame, TV screen, and much, much more.

On the end pages, there are suggestions for teachers/parents to extend activities. One suggestion is to search for shapes outdoors.  We did something similar after reading the book. Everyone paired up and did a scavenger hunt. More about this in an future post since we used some magical books by Tana Hoban for the scavenger hunt (Thanks Christopher Danielson (aka @Trianglemancsd) for the suggestion via twitter).

One word. Shapeshifter! A magical ingredient in any story.

However, while sharing The Greedy Triangle with this group, the shapeshifter became even more magical. Here is a picture of the purple shapeshifter. 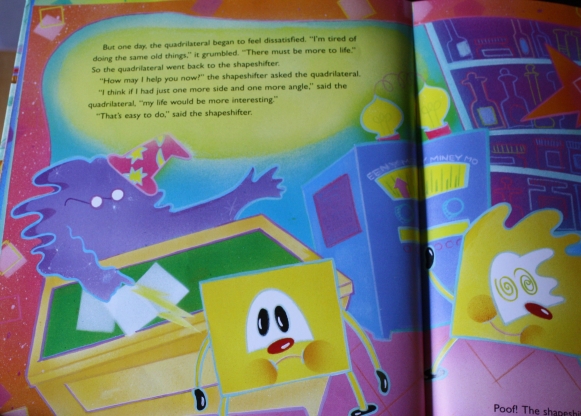 “Is the shapeshifter a shape?”

“The shapeshifter isn’t a shape, it’s a blob. It’s not a classified shape.”

In the weeks following, this wondering about what counts as a shape came up again in questions asked by my son Liam’s (7). A few days after this get-together, Liam asked whether the 10-sided cracker in the pic on the left was a shape. He was looking for a name. He wondered because “there are 9 sides and one curve.” Then just last week, we had a discussion about whether the amoeba-like shapes on the green piece of paper were shapes. We named them wobbles and he identified properties of wobbles (curved sides and closed). 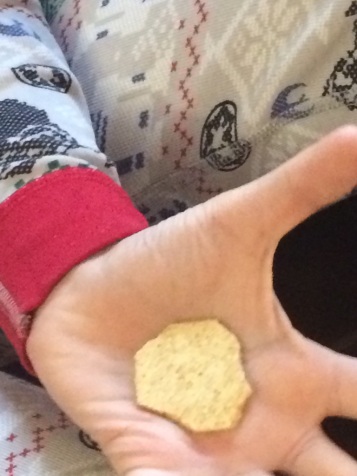 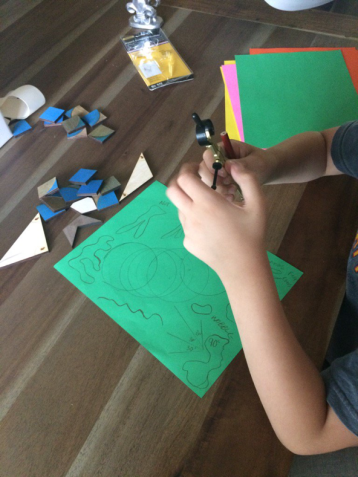 In geometry, there are named shapes and unnamed (or yet-to-be named) shapes. But the things we do with shapes, are the same whether the shape has a name or does not. We describe, measure,  model, analyze, compare, transform and prove things about un-named shapes (and even shapes that exist only in our imagination). Here is an article about the amazing life and monumental work of mathematician Maryam Mirzakhani, the first women to win the Field’s medal. Sadly, she passed away this past Friday. She’s described in the article as a “tenacious explorer of abstract surfaces (shapes)”.  She studied surfaces like hyperbolic doughnuts that “can’t be constructed in ordinary space; they exist in an abstract sense…. An imaginary creature living on a surface…” Mirazakhani’s ideas of shape have no bounds.  And Shane, Maddie and Liam’s comments are great reminders of the importance of expanding ideas of shape in school geometry.

At the end of the The Greedy Triangle is the following quote:

“While there is mathematical content in The Greedy Triangle, keep in mind that the book is meant to engage and delight children, stimulate their imaginations, and encourage them to develop a love of books and readings. … Some children may interrupt the story to express and idea or ask a question.   Some may want to talk about the illustrations. All these reactions are fine. At all times, follow the child’s lead.”

During this reading of The Greedy Triangle, these epsilons excitedly asked questions, shared their ideas and their wonderings and called out each next shape the triangle would become. I thank them for sharing this experience with me. And a special thank you to a great group of girlfriends for supporting me and sticking by side through my own shapeshifting the past 10 years. 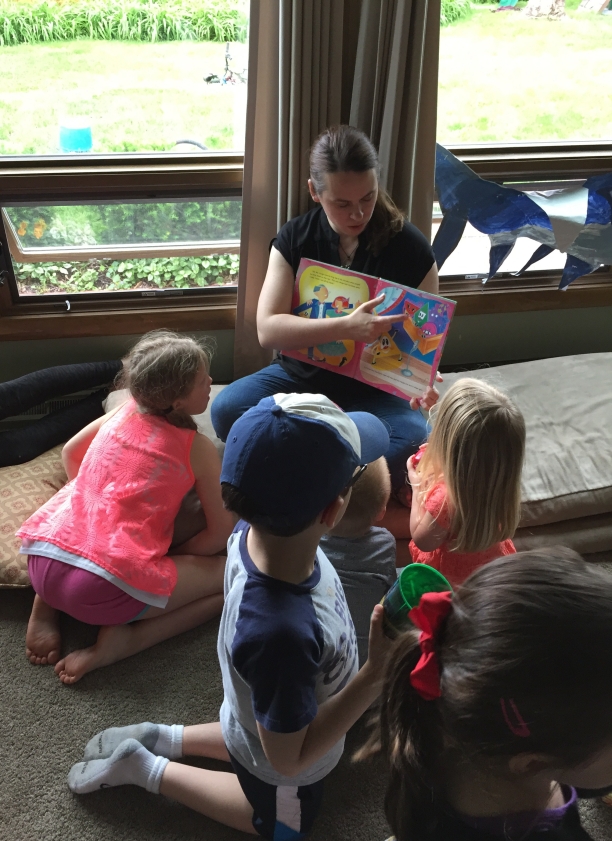 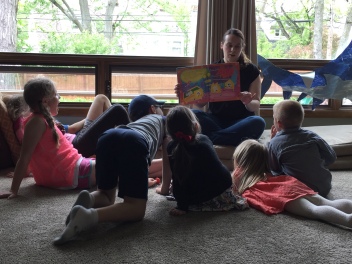 Have a magical math book you’d like share? Please go to the Shared booklist to find out how.  If you’d like to receive these magical math book posts each Monday, be sure to follow this blog in the side bar of this page. You can also connect to me on twitter (@KellyDarkeMath).

Thanks and see you next Monday! #mathbookmagic

*From the picture book, The Boy Who Loved Math: The Improbable Life of Paul Erdos by Deborah Hiligman, I learned “epsilons” are Paul Erdős’ nickname for children. [The mathematical definition of an epsilon is an arbitrarily small positive quantity.] I realize that some of our epsilons are almost teenagers so I hope they don’t mind that I referred to them as that:)